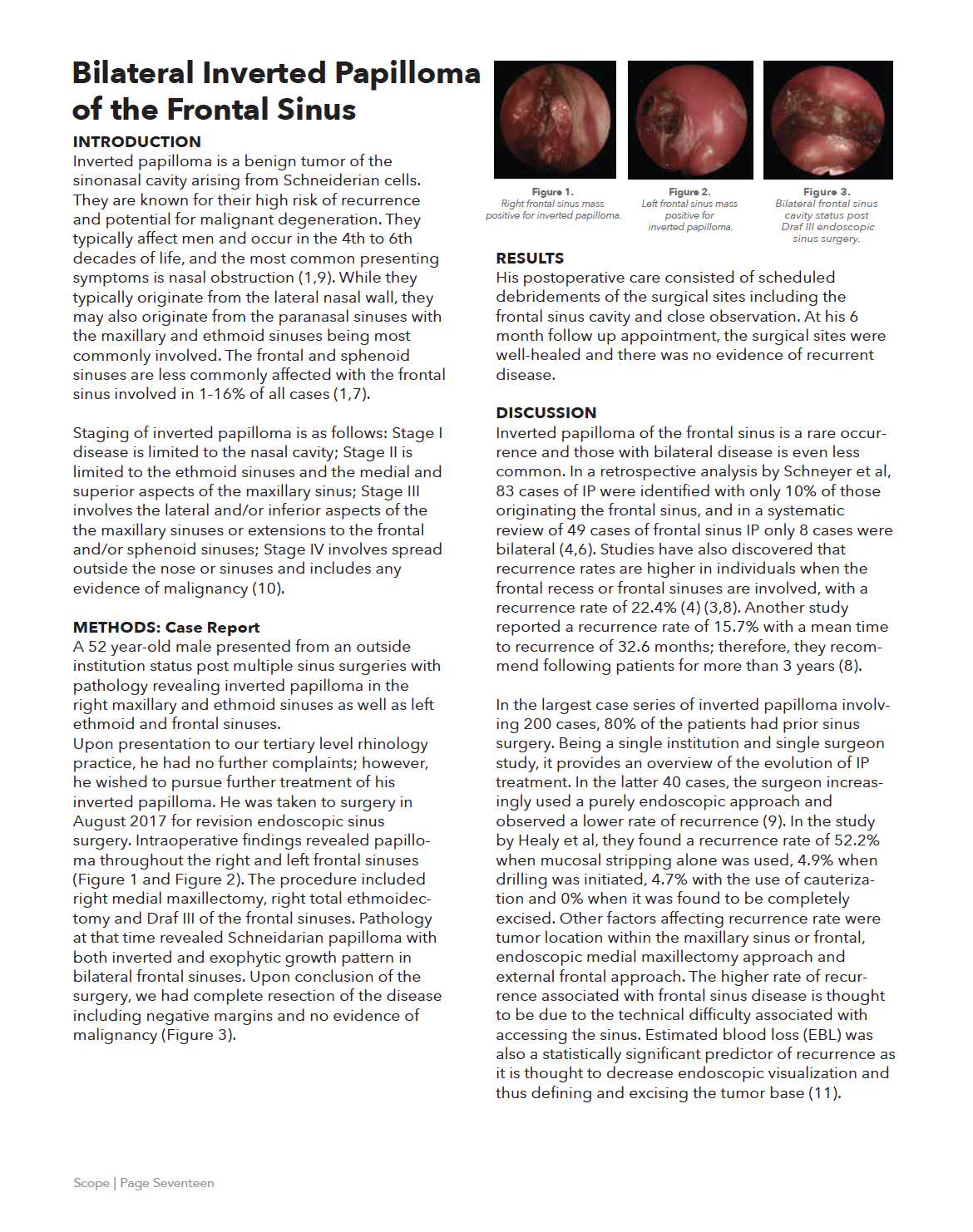 Inverted papilloma is a benign tumor of the sinonasal cavity arising from Schneiderian cells. They are known for their high risk of recurrence and potential for malignant degeneration. They typically affect men and occur in the 4th to 6th decades of life, and the most common presenting symptoms is nasal obstruction (1,9). While they typically originate from the lateral nasal wall, they may also originate from the paranasal sinuses with the maxillary and ethmoid sinuses being most commonly involved. The frontal and sphenoid sinuses are less commonly affected with the frontal sinus involved in 1-16% of all cases (1,7).

Staging of inverted papilloma is as follows: Stage I disease is limited to the nasal cavity; Stage II is limited to the ethmoid sinuses and the medial and superior aspects of the maxillary sinus; Stage III involves the lateral and/or inferior aspects of the the maxillary sinuses or extensions to the frontal and/or sphenoid sinuses; Stage IV involves spread outside the nose or sinuses and includes any evidence of malignancy (10).

A 52 year-old male presented from an outside institution status post multiple sinus surgeries with pathology revealing inverted papilloma in the right maxillary and ethmoid sinuses as well as left ethmoid and frontal sinuses. Upon presentation to our tertiary level rhinology practice, he had no further complaints; however, he wished to pursue further treatment of his inverted papilloma. He was taken to surgery in August 2017 for revision endoscopic sinus surgery. Intraoperative findings revealed papilloma throughout the right and left frontal sinuses (Figure 1 and Figure 2). The procedure included right medial maxillectomy, right total ethmoidectomy and Draf III of the frontal sinuses. Pathology at that time revealed Schneidarian papilloma with both inverted and exophytic growth pattern in bilateral frontal sinuses. Upon conclusion of the surgery, we had complete resection of the disease including negative margins and no evidence of malignancy (Figure 3).

His postoperative care consisted of scheduled debridements of the surgical sites including the frontal sinus cavity and close observation. At his 6 month follow up appointment, the surgical sites were well-healed and there was no evidence of recurrent disease.

In the largest case series of inverted papilloma involving 200 cases, 80% of the patients had prior sinus surgery. Being a single institution and single surgeon study, it provides an overview of the evolution of IP treatment. In the latter 40 cases, the surgeon increasingly used a purely endoscopic approach and observed a lower rate of recurrence (9). In the study by Healy et al, they found a recurrence rate of 52.2% when mucosal stripping alone was used, 4.9% when drilling was initiated, 4.7% with the use of cauterization and 0% when it was found to be completely excised. Other factors affecting recurrence rate were tumor location within the maxillary sinus or frontal, endoscopic medial maxillectomy approach and external frontal approach. The higher rate of recurrence associated with frontal sinus disease is thought to be due to the technical difficulty associated with accessing the sinus. Estimated blood loss (EBL) was also a statistically significant predictor of recurrence as it is thought to decrease endoscopic visualization and thus defining and excising the tumor base (11).

While surgery is currently the gold standard of treatment, possible future treatment may also include topical agents which are currently being investigated. In study of 8 patients with IP involving the frontal sinus, all received an application of 5-FU postoperatively. Their results showed no evidence of recurrence after 42 months in all cases (12). While this data is one of the first of its kind, it leaves open the door to further research in this treatment modality.

Bilateral frontal sinus disease is an extremely rare presentation for inverted papilloma. Due to the potential for recurrence and malignant transformation of IP, it is important to be diligent to perform complete resection of disease with negative margins. Surgical resection using endoscopic surgery has been shown to provide consistent results with low rates of recurrence.